Chanute & the Wright Brothers
In 1896, at the age of 64, Chanute began to actively experiment with gliders along the shores of Lake Michigan near Gary, Indiana. During his glider experiments, he developed the biplane. His biplane design was so successful that it underwent few changes during the next 50 years. It was the Chanute Biplane that the Wright brothers modeled their Kitty Hawk after.

In 1899, the Wright brothers wrote to Dr. Samuel P. Langley that they were about to begin aviation experiments and they wanted to know how to build and fly gliders. Langley replied that they should read Progress in Flying Machines and contact Chanute in Chicago. 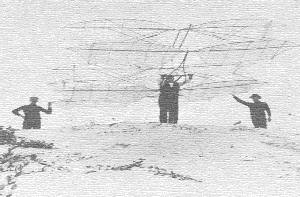 The Wright brothers received their copy of Chanute’s book personally from the author, who became both their friend and advisor. At their invitation, Chanute visited the Wrights at Dayton, Ohio and Kitty Hawk, North Carolina. It was Octave Chanute who, at a meeting in December, 1903, of the American Association for the Advancement of Science announced to the world that the Wright Brothers had flown in a heavier than air machine.
Wilbur Wright wrote: “If he (Chanute) had not lived, the entire history of progress in flying would have been other than it has been, for he encouraged not only the Wright Brothers to persevere in their experiments, but (his) private correspondence with experimenters in all parts of the world was of great volume. No one was too humble to receive a share of his time. In patience and goodness of heart, he has rarely been surpassed. Few men were more universally respected and loved.”

Sharing His Work
Chanute shared freely all information with any fellow experimenter who asked for it. He was a clearinghouse of information and kept experimenters the world over informed as to what he and others were doing. Chanute never tried to financially profit from his experiments and firmly believed that so many had worked towards the solution of flight that no one person, or persons, could take sole credit for the solution. He avoided all efforts to publicize his efforts in aviation and urged his children to do likewise. It has been estimated that Octave Chanute spent over $100,000 of his own money on his and others’ aviation experiments.