Chanute’s Link to Aviation History
Kansas has many well-known links to aviation with names such as Cessna, Beech, Earhart, and others. One name that should be included in this list is Octave Chanute, the namesake of the City of Chanute.

Born in Paris on February 18, 1832, Octave Chanute emigrated to the United States at age 6 with his father. Although he had no education in engineering, Octave Chanute would become one of the foremost civil engineers of the 19th century. 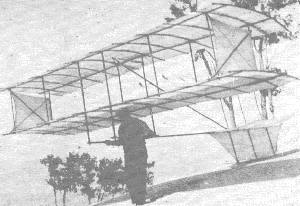 Attracted to railroading, he began working as a civil engineer at the age of 17. Ten years later, he became chief engineer of the Chicago and Alton Railroad.

In 1867, he moved to Kansas City to build the first bridge to span the Missouri River. The project was considered a greater engineering feat than bridging the “mighty” Mississippi River.

During the next four years, Chanute was in charge of building four railroad lines in Kansas. One of these lines would go through a town that would be formed and named after him in 1873, Chanute, Kansas.

Chanute also designed and built the Kansas City Union Stockyards. Later he chaired a committee formed to invest a rapid elevated transit system for the City of New York.

Chanute also studied the problem of wood preservation and set up facilities for preservation of timbers by the use of creosote. To determine the success or failure of the creosote process, Chanute invented the date nail, which was used by railroad and telephone companies until the 1960’s. This was to remain his principle means of financial support.

Chanute moved to Chicago in 1889, and began working on solving “the problem of the ages," heavier-than-air flight. He devoted his time to the subject until his death in 1910.

Chanute corresponded with men all over the world interested in flight. He gathered all the information could find, looking into records of experiments going back 300 years. In 1891, he wrote a series of articles, which were republished in the book, Progress in Flying Machines.

Progress in Flying Machines made Octave Chanute the world’s first aviation historian, but more importantly, for the first time experimenters could read of work done before them and not have to waste time by repetition.